Hazeltine National does not shy away from making changes to the Robert Trent Jones staple. As a reliable venue for the USGA and PGA’s most prestigious championships for the world’s best golfers, those changes have often preceded the U.S. Open, PGA Championship or Ryder Cup.

This year, Hazeltine was not only looking ahead to the 2024 U.S. Amateur Championship and the 2029 Ryder Cup, but it continues to actively pursue its mission of cultivating a membership that honors the game’s rules, traditions and competitive challenge. That’s why Hazeltine has turned its eye and architect to its signature hole: Hole 16 on Hazeltine Lake.

This spring and summer, the course partnered once again with Jones’s son, Rees Jones, to elevate the tee boxes on the signature hole, moving them further up the hill-carved teeing ground, creating a more dramatic panorama of the hole and its hazards.

“I really think it’s one of the most exciting projects that has taken place out here at Hazeltine in the last number of years,” said Hazeltine Superintendent Chris Tritabaugh. Before the June 18 tee box unveiling, from tee to green, the 400-yard dogleg right into Hazeltine Lake forced players to make decisions. After a long carry to clear water, golfers had to also account for a sloping landing zone. The fairway slants left toward a creek that runs the length of the fairway. Combined with the lake to the right and a dog-leg that limits tee shot length for long hitters and a green that bounce misplaced approaches into the lake, Hole 16 already forced decisions among members and pros alike, some of whom shared their thoughts with the St. Paul Pioneer Press in August 2002, before the PGA Championship at Hazeltine. 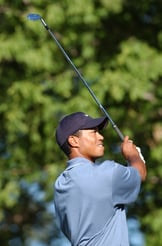 "You don't realize it unless you go out there, if you stand on the tee box and look at the middle of the fairway, all you see is the reeds off the tee," Tiger Woods said to the newspaper. "So you have to decide, left side of the tee box or the right side of the tee box. That's a signature hole here at Hazeltine, and I think it's going to be the one that everyone is going to probably remember."

Phil Mickelson: "It's a very difficult two shots, because the wind is the strongest right there."

And Minnesota's own Tom Lehman: "You have to hit a good tee shot and good iron."

By moving the tees back and up the hill, the carry over the lake from the members’ back tees now ranges from approximately 150-200 yards. The creek is brought into play even more, as it’s closer to the players’ tee shots. The elevation change also brings the full effects of the wind over Hazeltine Lake. 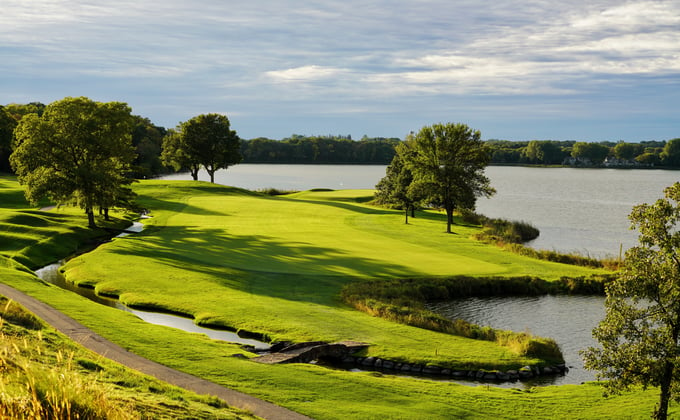 And then there is the visual. Picking landing zones and measuring the wind is one thing, but confidently focusing on a target, club in hand, is another when all of the hazards are easier to see, more prominent. The intimidation factor is high. Since its earliest conception before the 1962 opening, Hazeltine was intended to build a membership of devoted golfers on a course that would test even the best golfers in the world. Robert Trent Jones’ initial designs emphasized course length and a challenging layout, which first tested championship golfers during the 1966 Women’s U.S. Open, with Sandra Spuzich coming out on top.

Four years later, Hazeltine gained attention for its difficult layout during the 1970 U.S. Open, to the point that some players deemed it too challenging. That championship was the impetus to start planning several course changes. Following the return of the Women’s U.S. Open in 1977, Robert Trent Jones’ course redesign plans started taking shape the following year, including the now signature 16th.

The 16th began as a 214-220 yard par 3, and the 17th was a par 4. The 16th green was flanked by trees and recessed from the shore, leaving the lake largely out of play. During course changes after the 1970 U.S. Open, Robert Trent Jones decided to bring the lake and surrounding landscape into play more by extending the hole to a par 4 and making the 17th a par 3. He brought the lake into the tee shot as well, situating the tee box off the shore, below the 15th green, requiring a carry over a small inlet.

Changes to the 16th hole and rest of the course debuted in the 1983 Senior U.S. Open, and alterations preceded other championships. After Payne Stewart’s dramatic playoff victory at the 1991 U.S. Open -- where the 16th served as a dramatic turning point on the last two days of play -- the hole was extended 18 yards.

Since the 1991 U.S. Open, Rees Jones and his firm have continued the partnership with Hazeltine, spearheading remodels prior to the 2002 and 2009 PGA Championships, as well as the rebuilding of the course’s greens in 2010.

How the New 16 Tee Will Impact Championship Play The latest changes to the course’s signature hole will continue Hazeltine’s active, ongoing pursuit of tradition and competitive challenge for its members and competitors in the 2024 U.S. Amateur and the return of the Ryder Cup in 2029.

Read More on the History of Hazeltine