When the competitors in the 4th U.S. Senior Open arrived at Hazeltine, they found a much different golf course than the one that many of them had played in the 1970 U.S. Open Championship.  Robert Trent Jones had reworked his original design gradually at first, but in five years leading up to the Senior Open, a number of dramatic changes had been made in the hopes of bringing major championships back to Hazeltine.

Doglegs on the first, ninth, and eighteenth holes had been eliminated, and other doglegs had been softened.  The long par-3 eighth had been shortened, and the green had been moved across the pond from where it was.  However, the biggest changes were to be found by Hazeltine Lake.

The 16th hole, which had been a long, downhill par three, was transformed into a dangerous two-shot hole playing along the lake.  The 17th was converted into a par three.

The Championship began under sweltering conditions, with the temperature and the humidity well into the nineties.  Unusual, too, was the fact that most compelling stories of the first day were not those of famous veterans of the PGA Tour, but of relative unknowns. 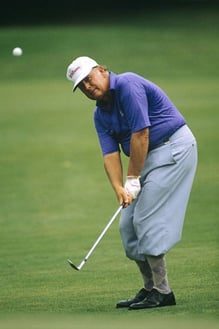 Dick King, a Florida citrus grower, played his first nine holes in 30, a nine-hole record which had been tied in subsequent Senior Opens, but never broken.  He finished with a 70, tied with Jack Harden, who had helped to design the golf club used on the moon, and John Cook, a Minnesota club professional.  Eight players were at 71.

On Friday, some of the favorites moved to the top of the leaderboard.  DeVincenzo took the 36-hole lead with a score of 141, one under par.  Billy Casper, a winner of two U.S. Opens, shot 69, the best round of the week, and was one stroke back, tied with Barber,  Dan Sikes, and Guy Wolstenholme.  Palmer, who was attracting huge crowd and lots of media attention, slumped to a 79.

The third round featured strong winds that, combined with the ever-hardening greens, drove scores higher.  Casper managed a 73 to lead by three going into the final day.

On Sunday, Casper led by four going into the final nine holes.  A late charge by Rod Funseth, who birdied three holes coming in gave him the lead, but he bogeyed the 18th hole.  They tied at 288, four over par, still the highest score relative to par in a Senior Open, setting up a Monday playoff.

In the playoff, Funseth got off to an early lead, but the two were even after nine.  On the tenth hole, Funseth hooked a shot into the woods and made a double bogey.  It looked as if Casper could coast to victory, but he bogeyed three holes, including the 18th, and both players ended the round with a score of four over par for the day. 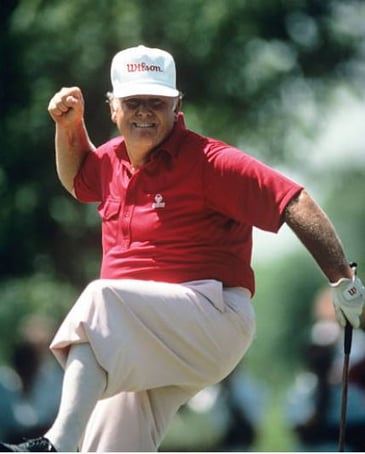 As the sudden death playoff began, Funseth and Casper both reached the first green in regulation and had makeable birdie putts.  Funseth putted first and missed.  Casper ended a grueling week by making his putt from ten feet.

In the wake of the championship, there was much optimism about the future.  The Senior PGA Tour, then in its infancy, could take heart from the large crowds and the predications of even bigger things to come by commentators at the event.

From the members of Hazeltine, all eyes turned to the USGA.  The Senior Open had been viewed as a possible stepping stone for the return of the U.S. Open, and now it was time to wait.