U.S. Junior Amateur field will expand and require the use of two courses, beginning in 2020

FAR HILLS, N.J. (July 19, 2017) – The United States Golf Association (USGA) today announced Hazeltine National Golf Club in Chaska, Minn., as the host site for the 73rd U.S. Junior Amateur Championship. The dates of the championship, which will be the ninth USGA event hosted by the club, are July 20-25, 2020. 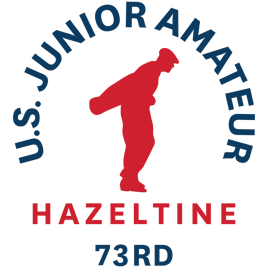 “Hazeltine National Golf Club has been supportive of USGA championships from the inception of the club to the present and we are appreciative of this committed and enduring relationship,” said Stuart Francis, USGA Championship Committee chairman. “By expanding the U.S. Junior Amateur field in 2020 we are providing additional opportunities for the world’s best junior players to compete in the championship.”

Designed by Robert Trent Jones in 1962 and remodeled by his son, Rees Jones, on several occasions, Hazeltine National Golf Club takes its name from nearby Lake Hazeltine and is located southwest of Minneapolis. The layout blends the rolling hills, lakes, developed woods and the prairies of the upper Midwest. Chaska Town Course, a public facility, was designed by Arthur Hills and opened for play in 1997. The course features 285 acres of oak groves, open prairie and marshlands.

“Hazeltine National is honored to be selected as the host site for the 2020 U.S. Junior Amateur Championship,” said Bob Fafinski, club president. “We look forward to our partnership with the USGA and the city of Chaska in delivering a world-class amateur event. At Hazeltine, our mission as a golf club is to host national championships, which includes golf competitions at all levels – men and women; professionals and amateurs; seniors and juniors. Hosting the 2020 U.S. Junior Amateur Championship fits perfectly with our mission. We look forward to welcoming the best junior players in the world to compete on our golf course in 2020.”

The U.S. Open Championship has been contested twice at Hazeltine. In 1970, Tony Jacklin became the first Englishman to win since Ted Ray in 1920. Jacklin’s four-round score of 7-under 281 was seven strokes better than his nearest competitor. Payne Stewart defeated Scott Simpson in an 18-hole playoff to claim the 1991 U.S. Open title. The two players were tied at 6-under 282 after 72 holes. Stewart, who would later win his second Open in 1999, gained four strokes over the last three holes of the playoff to win by two.

The U.S. Women’s Open has twice been played at Hazeltine. Sandra Spuzich won by one stroke over defending champion Carol Mann in 1966. Spuzich birdied holes 16 and 17 to take the lead and win her first professional title. In 1977, Hollis Stacy won the first of her three U.S. Women’s Opens, defeating Nancy Lopez by two strokes.

Hazeltine also hosted the 1983 U.S. Senior Open and 2006 U.S. Amateur championships. Billy Casper holed a 10-foot birdie putt on the first extra hole of a playoff round against Rod Funseth to win the Senior Open. Casper, a two-time U.S. Open champion, and Funseth were tied after 72 holes and each carded a 75 in the 18-hole playoff. In 2006, Richie Ramsay, of Scotland, won four of six holes with birdies to take an early 3-up lead and then held on to beat John Kelly, 4 and 2, in the 36-hole U.S. Amateur final. Medalist Billy Horschel fired an 11-under 60 in the first round of stroke play at Chaska Town Course in the 2006 Amateur.

The 2020 U.S. Junior Amateur will be the 37th USGA championship in Minnesota and the third U.S. Junior Amateur. In 1958, Gordon Baker was the champion at the University of Minnesota Golf Course in St. Paul, and in 1984, Doug Martin won at Wayzata Country Club in Wayzata.

The 2018 U.S. Junior Amateur will be contested July 16-21 at Baltusrol Golf Club in Springfield, N.J., and the 2019 championship is scheduled for July 15-20 at Inverness Club in Toledo, Ohio.

About the USGA
The USGA celebrates, serves and advances the game of golf. Founded in 1894, we conduct many of golf’s premier professional and amateur championships, including the U.S. Open and U.S. Women’s Open. With The R&A, we govern the sport via a global set of playing, equipment and amateur status rules. Our operating jurisdiction for these governance functions is the United States, its territories and Mexico. The USGA Handicap System is utilized in more than 40 countries and our Course Rating System covers 95 percent of the world’s golf courses, enabling all golfers to play on an equitable basis. The USGA campus in Liberty Corner, New Jersey, is home to the Association’s Research and Test Center, where science and innovation are fueling a healthy and sustainable game for the future. The campus is also home to the USGA Golf Museum, where we honor the game by curating the world’s most comprehensive archive of golf artifacts. To learn more, visit usga.org.