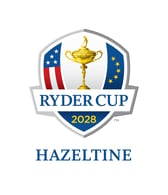 WITH A LITTLE HELP, THE PGA OF AMERICA ANNOUNCES

THE RETURN OF THE RYDER CUP TO MINNESOTA IN 2028

The video was pushed out this morning on RyderCup.com, Twitter’s @RyderCup and Instagram, and culminates with a visually pleasing “throw” that sends a curling stone gliding down the ice (“sheet”) to the red circular target (“house”), where the iconic Ryder Cup Trophy is waiting to symbolically declare the Ryder Cup’s return to Minnesota in 2028.

Officials from the PGA of America and Hazeltine will gather on April 10 in Chaska to discuss the return of the Ryder Cup, which comes little more than 18 months after the completion of the 2016 event.

Designed by Robert Trent Jones in 1962 and enhanced by his son, Rees Jones, in 2002 and 2005, Hazeltine National Golf Club takes its name from nearby Lake Hazeltine. The par-72 layout blends the rolling hills, lakes, mature woods and prairies of the Upper Midwest and is consistently ranked amongst America’s 100 Greatest Golf Courses.