Become a Better Golfer: Select the Right Club for Your Short Game

The best way to set yourself up for greenside and short-game success is knowing where to miss on your approach shot, which gives you the most green to work with and your best chance at getting up and down.

If you miss the green, short-sided or not, you’ll have a few decisions to make. Your up and down decision-making will be based on three key components:

1. Pick The Type of Shot

There's not enough daylight to practice every shot you need around the green. But as a general rule, you need two basic shots:

Occasionally, you might have a shot with equal air and ground time. Call that what you want, but typically it's used when you're not very close to the green.

Once you have determined what shot you need to play, the next factor is assessing how the ball is sitting.

Don't overlook this step! It can determine the kind of shot you must play. Here are some questions you should ask yourself:

The best way to know what to do with these types of lies is by recreating them in practice. But overall, if your ball is sitting down in the grass that is growing against your target, or if you're in deep grass, you'll want to give the ball a little extra mustard to get it to the target. That said, every shot is different! That's why practice is so important.

If you ask a player which club they hit 150 yards, you will likely receive a quick answer. But if you ask them which club they use to hit a 24 yard basic chip shot, chances are you will get a confused look. The reality is most players haven’t given much thought to club selection when it comes to controlling the distance of their chip or pitch shots, but they really should. 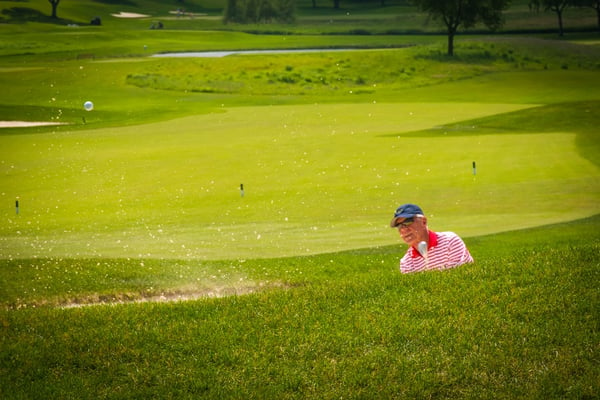 The laws of physics say that if you take the club back to the same point in your backswing and swing with the same rhythm, the loft on each different club will make the ball travel different distances. Here’s how you can calculate this:

As you can see, there’s a nice five to six-yard variance between each chip when using the same backswing length and rhythm. Upon assessing each chip shot on the golf course, it may be helpful to either pace off the distance of the shot, or, if it is longer than 25 yards, use your laser range finder to confirm the yardage. If you need to carry the chip shot over a stretch of rough, pay attention to selecting a club that will carry at least that far.